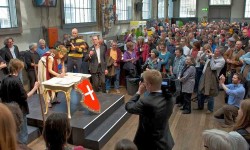 The unconditional basic income (UBI) is a monthly income sufficient to live, paid individually to each person from birth to death, by the State. It’s unconditional and thus everybody would receive it, wether they have an additional income or don’t.

Currently, we get all of our income from our work, our property, our family or from social benefits. UBI would replace the part of your wage covering basic needs. Additional income would be for comfort. 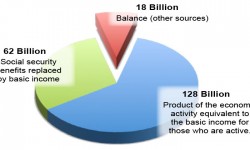 An unconditional basic income (UBI) guarantees access to basic necessities. People wouldn’t look for a job just to survive, rather they’d look for a job because nobody wants to live with the strict minimum. They could thus negotiate their work conditions in order to satisfy their want for comfort and not their basic needs. Working conditions could improve to motivate people receiving the UBI to engage themselves. On one hand, you’ll enable people to negotiate part-time jobs and on the other you’ll enable people to get a job more easily. Business will be liberated from their responsibility of offering a living wage. They will be encouraged to automate their most repetitive and less attractive jobs.

Actually, the introduction of the UBI wouldn’t cost anything. It wouldn’t be an extra charge for the State, like when it comes to building a new hospital or offering public services. Instead the State would just have to redistribute the generated wealth in a way that benefits the entire population. Basic income guarantees that basic needs are covered for everyone. Today, almost everybody has an income to satisfy the strict minimum. Basic income would thus almost entirely finance itself replacing current welfare programs and with the “living wage” part of most salaries. Then we would only have to finance a very modest amount to pay for those who don’t have a living wage today.

By numbers (Statistics from the Federal Statistics Office): Let’s start with the idea of a basic income of 2500.- for every adult and 625.- for every minor. The total sum of money transfert to the population amounts to 208 billion swiss francs. The amount financed by replacing existing welfare programs is at 62 billion. And the transfer of existing “living wages” would get us 128 billion. In the end we’d just need to finance 18 billion (only 3% of Switzerland’s GDP), less than the costs of healthcare linked to work. This sum could be covered easily by a large variety of methods, like a small increase in the VAT (added value tax), through income taxes, through taxes on automation or on the environmental footprint and so on.

Other methods to finance basic income are entering the debate nowadays, like the introduction of a micro-tax on all financial transactions (Chesney/Bolliger) or with the profits made by national monetary creation (federal initiative for “full money”). Anyway, the optimal way to finance basic income will be elaborated later on, probably by combining different approaches. The final choice will be in the hands of the people in an additional referendum, since the current initiative only proposes to adopt the principle of an unconditional basic income. 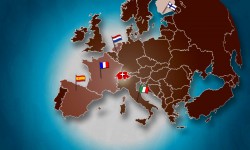 Forms of basic income have already been tested notably in the United States, Canada, Namibia and India. The principle of Basic income has been introduced to the constitution of Brazil in 2004. Koweit and other gulf states have introduced basic income for their citizens. Finland and Québec decided to introduce it in 2017. In the Netherlands, the city of Utrecht and a dozen other cities will test a basic income, which has also entered the public debate in France as a candidate to replace the RSA (Social assistance). (More information on Wikipedia)